A surprise video - why you shouldn't take testing too seriously

Despite having the technical aptitude of a baked potato, I’ve put together a small video (well, radio, really) rambling about why testing shouldn’t be taken seriously.

I’ve covered a few of the points above, but thought I’d give this a crack, see how it goes. I had initial planned to set up a Youtube account, but as I’ve no idea how often videos will appear (if at all) I’ve postponed that.

Between the end of last season and now I tipped, several times, two bets for the Drivers’ as well as sometimes mentioning two others (one Driver, one Constructor).

The bets I liked most were with Ladbrokes, each way with boost (fifth odds top 3) of Bottas at 16 and Alonso at 12. I’ve said for a while a key factor will be whether the Renault engine stacks up, which is even more about reliability than pace (with better reliability Red Bull would’ve outscored Ferrari in 2017). If the Renault is tasty, then McLaren and Alonso stand a good chance, particularly as the Red Bull drivers are quite even and Alonso is likelier to have an overt number one status. If the Renault is rubbish, then Bottas only has to finish top 3 of four drivers (the others being his team mate, Vettel and Raikkonen) which seems eminently possible.

The two other bets I mentioned less frequently were Vandoorne at 81 each way, because of a bit of buyer’s remorse (not impossible, but probably a bit daft on my part) and Red Bull at 9.2 (Betfair this time) because it wasn’t up for as long. I think the Constructors’ title will be down to Mercedes or Red Bull, again, based on the Renault engine as much as anything. Of the probable top four teams, Red Bull has the outstanding driver team.

In calendar terms, we lost Malaysia. That’s a bit of a shame as the circuit was one where overtaking was actually possible, and the safety car odds were usually wrong because everybody remembers the 2009 monsoon and forget that, after Hungary, it was the track least likely to have a safety car.

Two additions to the calendar this year, with the regular off-and-on Hockenheim (too hard to pass) returning, and the return after quite some time of a Grand Prix in France. Always seemed odd not racing there, so let’s hope the circuit is a good one (most modern circuits are poor, although the US is very good so hope is not lost).

Speaking of the US, for some reason that’s still only provisional and subject to confirmation. I’ll be annoyed if we lose the best new circuit for decades.

If it remains on the calendar, we’ll have a 21 race season, with a maximum points tally available of 525. Last year (20 races), Hamilton, Vettel, and Bottas exceeded 300 each, with Verstappen, Ricciardo and Raikkonen following (Verstappen got 168, the other two 200 and 205 respectively).

Mostly fortnight gaps, but the French, Austrian and British Grands Prix occur on consecutive weekends, and there’s the usual four week gap (between Hungary and Belgium).

The first race, Australia, is a bit unusual and not necessarily a great indicator for the season as a whole. It’s also, historically, good for McLaren. Things to watch out for early on will include engine reliability, getting a feel for overall pace, and trying to remember the ridiculous rainbow of tyre compounds now available (hypersoft, ultrasoft, supersoft and soft is just stupid, although I’m mildly amused at the new superhard compound).

We also learned which races, in the UK, will be broadcast live on free-to-air Channel 4 (next season every live race will be paid TV only (excepting Silverstone), with FTA getting highlights. Great). Live races for 2018 on Channel 4 are:
Bahrain
Azerbaijan
Monaco
Austria
UK
Belgium
Singapore
Japan
US
Abu Dhabi

Bahrain is usually dreadful but did have a classic in 2014. Azerbaijan and Monaco are tedious, as are Singapore and Abu Dhabi. Austria is ok. The UK, Belgium, Japan and the US are good. It is displeasing that all the worst races are on the live list. A slightly weird mix as almost every circuit is either dreadful or fantastic. 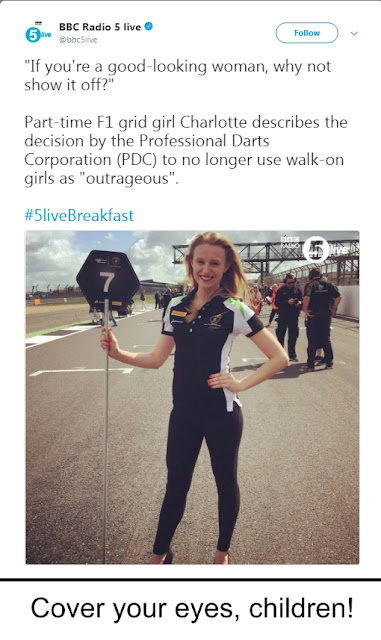 In other news, F1 has decided that grid girls are to be no more, as it’s not in tune with the sport’s ethos (unlike the Chinese/Azerbaijani lack of democracy, Bahrain suppression of protest etc): http://www.bbc.co.uk/sport/formula1/42890261

I think this is bloody stupid. A more sensible approach would’ve been to soft-switch, have the grid person be opposite the driver’s gender and, as women come into the driving side, a natural change would occur in the ‘glamour’ side. Instead they decided that ‘empowering women’ means taking work away from them, because modelling isn’t on the Puritans’ List of Approved Work for Women. [As an aside, women drivers should come in, and the sooner the better. There are few sports men and women can compete directly in together, and F1 is one of them. Plus, women tend to be shorter and have less mass, which means a lower centre of gravity and more scope for ballast].

It later emerged that Liberty has plans for grid kids instead. Because the duties of a grid girl, deemed to demean and objectify women who are paid professionals, are magically transformed into a wonderful thing when done by unpaid children. The selection appears to be either merit (drivers in junior formulae) or lottery, though how entry to said lottery would function is currently unclear.

I do wonder if this is a reaction to the deluge of negative publicity or whether it was intended all along. If the former, which seems likely, it would explain the delay in the announcement. However, that decision remains a steaming mountain of horse manure, particularly when there are many more serious matters (not least the indefensible pay structure of F1) to address. But it’s easier getting headlines appeasing third wave feminists opposed to women being free to make a choice of which the former heartily disapprove.

After the pre-season testing is done, I’ll put up a new article about how I think things stand. Remember, kids, mood music matters more than headline times. Enormous fuel tanks, umpteen tyre compounds, and varying engine modes mean that times can be very misleading indeed (unlike in splendid 2009 when it was obviously apparent the Brawn might just be a good car).


Morris Dancer
Posted by Thaddeus at 10:42 No comments: